I made Chocolate-Mint Grasshopper Pie for pi day. 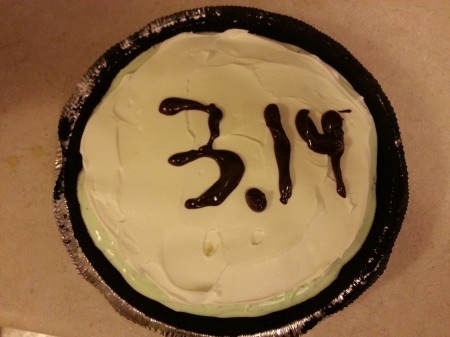 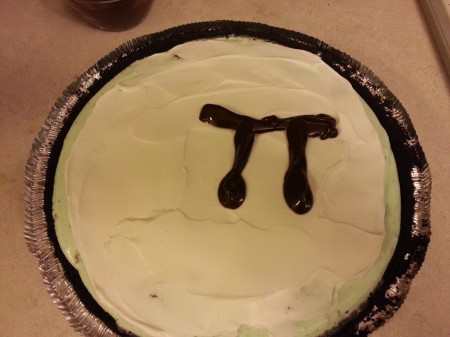 I just bottled my first 5 gallon beer YEAH. I have done several Mr. Beers in the past, but those were all using plastic bottles.

Thinking it wouldn’t take more then an hour and a half, I started getting all my bottling supplies prepared. I got 54 bottles ready, sanitized them using star-sans, boiled my 5oz of sugar, transferred my Irish red from the carboy to the bottling bucket (sanitized). I started bottling, spilled a little here and there, but I thought overall pretty good.

I ended up with 51 bottles, which I thought was awesome for my first batch. 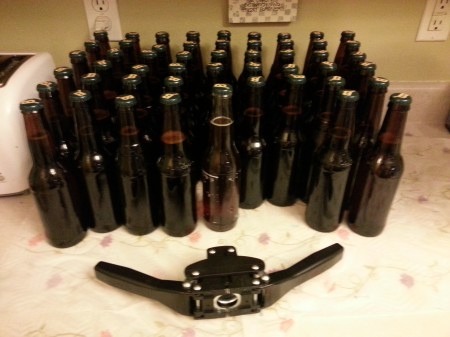 Took the first 36 bottles down stairs to my unfinished basement (had boxes from previous 12 packs). Then I was going to take the last of the bottles down stairs. I had 12 bottles which were in two 6 packs (in a plastic bag) in one hand, and in the other hand a 6 pack (3 full/3 empty). I made it about 1 step and the bottom of the 6 pack gave away. All six bottles went down the stairs, 2 of the full ones broke, and I think 1 of the empty ones broke. Beer and glass all over, good thing the basement is unfinished, but still made a huge mess and this is at about 10:15 at night, and I was ready to go to bed. Over an hour later, I am finished cleaning up the mess.

I was too frustrated to take any pictures of the mess!

I put them all in totes just in case of bottle bombs, taking no chances with this.
Just wanted to share my first bottling experience.
The end

So, since this is my first brew, I thought I would show what I have done. Moving from the primary to the secondary (carboy). 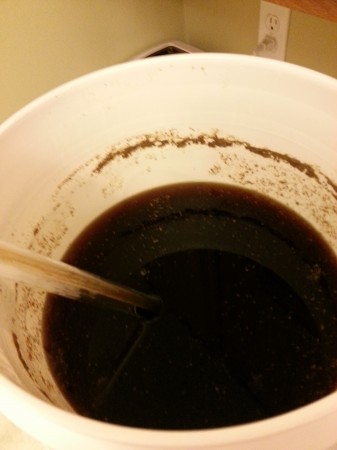 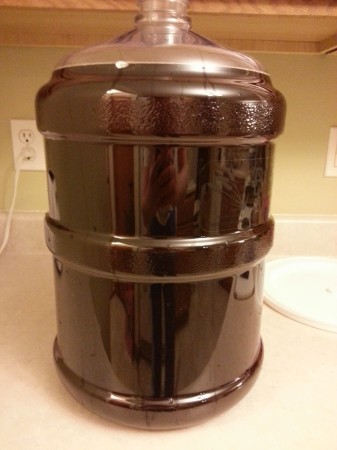 Drew a little for tasting, unbelievably awesome. Cant wait for it to be carbonated and cold. 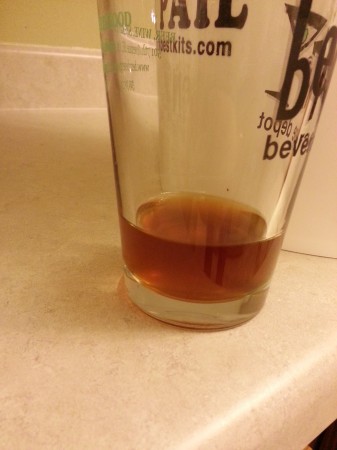 Sludge, glad this settled out. 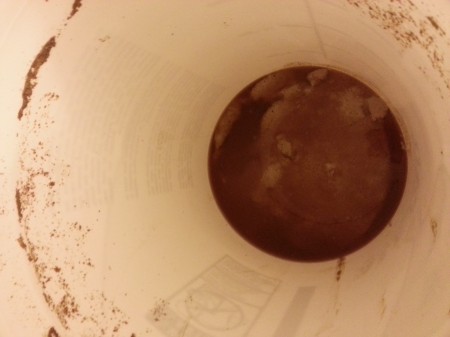 I will post some more pictures when I get around to bottling.

Look at what came home with me, a new bigger brewing kit! I received the Mr. Beer kit for my birthday, while it worked great, most of the brewing community does everything in 5 gallons batches, so I have decided to take brewing to the next level. 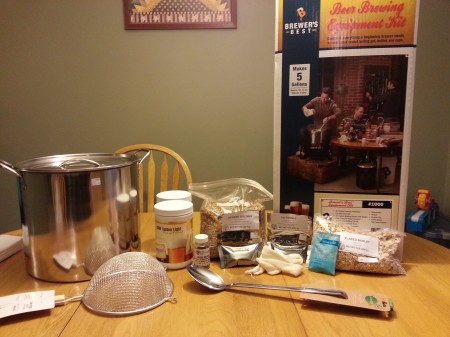 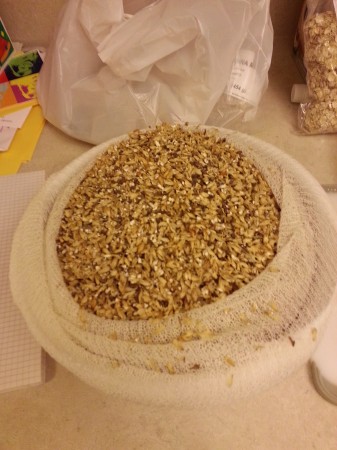 Sorry, a little fuzzy, but steeping the grains. 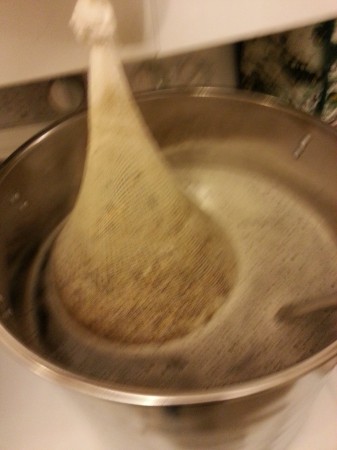 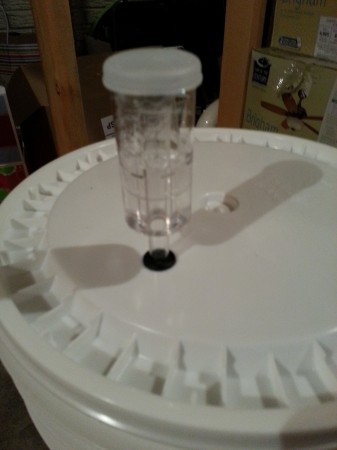 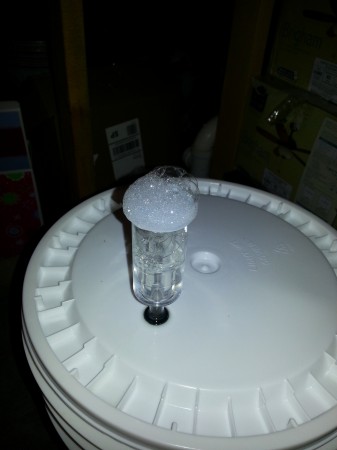 I created a couple of the typical new year’s resolutions here, but these are the things I have been wanting to do, and I will do in 2013.

If you know me, my favorite pop is?… Diet Mountain Dew!!! This one will be the hardest for me, since I drink plenty of pop, usually 3 a day. Now I know I wont ever go through life without drinking another pop, my goal here is to not drink pop daily, however if I have 1 a week, I would consider it a success. I did it in college for a couple of months, and I will do it again!

Last year I made a resolution (not necessarily a news year’s resolution), but it was to run a half marathon, and I exceeded that goal by running 2 half marathons. I wanted to run a full marathon in 2012, but knew it would be best to train all year for it, an lose some weight along the way. I ran 582 miles in 2012, and hopefully can run 700+ in 2013.

"Theoretically, there are very good reasons to take a break from a behavior, totally," says Reid Hester, director of research at Behavior Therapy Associates, explaining that an initial period of complete abstinence can make it easier for people to moderate behavior by eliminating the habitual, automatic aspect of the unwanted activity.

Take a cue from the self-help group Moderation Management (MM), which advises problem drinkers to abstain completely for a month before attempting moderate drinking. If you can't achieve a month of abstinence, the thinking goes, successful moderation is unlikely.

Stick To It
Experts say it takes about 21 days for a new activity, such as exercising, to become a habit, and 6 months for it to become part of your personality. Your new healthful habits will become second-nature in no time.

So, I posted about a week ago, that I would be running my second half marathon. I have completed the race, and what a race it was. I did a little more research this race, and did some things differently then last time. I broke up the race into 3 smaller races, 5 miles, 5 miles, and a 5k. One of the other things I did was take more gel packets ( I used the Clif Gels). I think I took 3 during my first half marathon, during this one I took 1 before the race, and 4 during the race (about every 25-30 minutes). I started off at my normal pace and took it very easy the first 5 miles. I was a little worried for the next 5 miles as it was on a gravel trail, however to much my surprise, I had tons of energy and the trail had hardly any rocks, more of a dust trail and it felt awesome on my feet. I posted my splits below for 1 mile paces, but as you can see, around mile 7, I picked up the pace, and ran faster then I probably should have, but pulled some awesome times (Disclaimer my GPS is always a little off, and it stopped recording around mile 11). I finished the race with a Gun time of 2:17:18, chip time of 2:16:53 and pace of 10:28/M. A very successful run, my only worry is improving upon this for the next one! Pictures posted below!

Start of the race 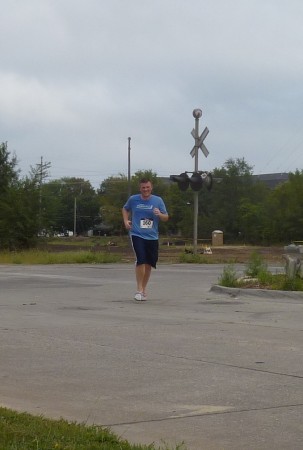 Right before the finish line. 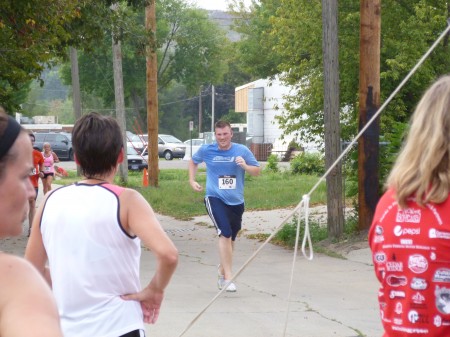 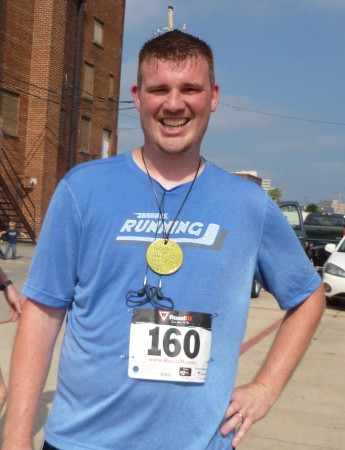 Wow time flies, its the END of summer already. I am not sure where this extremely hot summer went, but I know I have logged some miles (running). I ran a half marathon back in May of this year, well I decided to run another half marathon (New Bo Fest). I believe I am in a little better shape this time around, I have a soft goal shaving off 10 minutes off my total time, which was about 2:34, so hopefully I can pull off a 2:24 half marathon and I will be happy. I did get some new Vibrams five fingers since my other ones were starting to fall apart after approximately 300 miles. Once I complete this, I am planning on running a full marathon in 2013. While the Vibrams are awesome for summer months, I will need to find some winter shoes once the snow starts flying. The Vibrams are not insulated or waterproof.

One of my other goals is to find a technical project to work on it my spare time and post about it. If you have any ideas let me know!

For my birthday, I got a Mr. Beer kit. I wanted to get into brewing, but didn’t want to take the leap into a expensive kit, so this turned out to be a great gift. 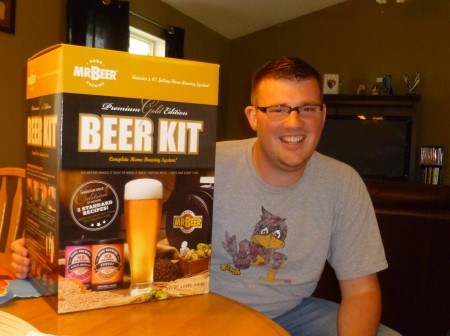 I brewed the Cowboy Lager first, and it turned out really good. Here is a picture, it has a little yeast from the bottom of the bottle, normally its not so cloudy. 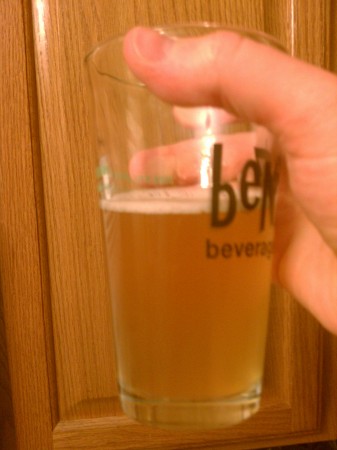 Just brewed the Blonde Ale, look for a status update in about a month.

I completed my first half marathon on May 19th, scary I am just getting around to posting about it. 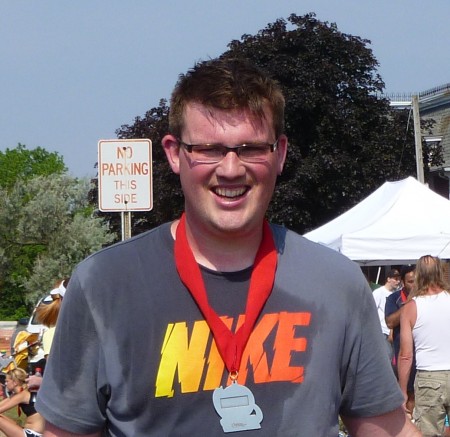 Now all I have to do is find my next challenge.

Since there was only 2 people in my division, I actually got a medal too! 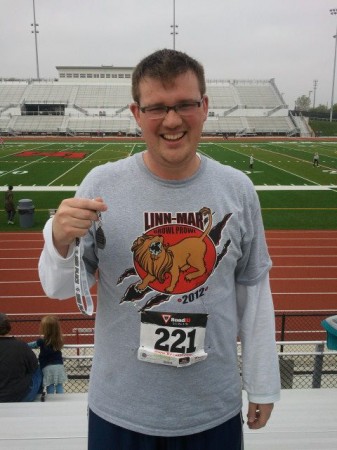 I will follow up when I finish my half marathon. Cheer!