My blackberry app of the week is Slacker, its a music play on your desktop,  blackberry, iphone, or their own slacker g2. I am going to talk about it on my blackberry. It Plays music similar to Pandora or Last.fm. If you havent heard of any of those then you probably dont listen to streaming music much. You basicly pick a artist or genre, and it trys to play music similar. Slacker plays music from a  genre or artist. Since streaming music on anything pre-3G is kind of slow, they have caching option that allows you to download from your PC or Wi-Fi.  They recommend 500Mbytes per cached station.

My one complaint is, its slow for a blackberry app, delayed when moving from menu to menu.

Since I use my htpc ( home theater pc) everyday I thought I would try out the newest media center program called boxee. It took me a while to get the windows alpha invite, but it seems to be worth it. I have been using the application for a couple of days, so I thought it would be time to write a review for it. The windows version is currently missing netflix, but I believe it will be added soon. I normally use mediaportal for my media playback, but since boxee has internet streaming video its the only reason why I am testing it out.

One thing I thought was awesome, was when I pressed the “Print Screen” Button, boxee knew what I was doing, and asked me to setup a folder for screenshots, which made this review really easy. The screenshots were saved as .bmp which take up alot of room, so maybe an option to make them jpgs would be nice, because I had to open up all these images and save them a jpg’s.

Also I wanted to include some larger thumbnails because I use a 1650×1050 widescreen monitor, but on wordpress medium is 300×187 and Large is 1024×640, and the large ones messed up my wordpress themes.

I have include a lot of screenshots for this review if you just want to see the slideshow click here.

After you setup an account online at boxee you login, as you can see I have my account added already. 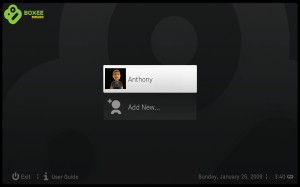 Once you are logged in, you will see a screen similar to this, Recommendations from friends, Friends Activity, Recently Added ( to your library), and Recently Used ( viewed or listened to), the menu is on the left. 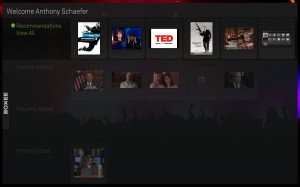 Now to the menu on the left, this is where you will all your navigation.You see Now Playing, Video, Music, Pictures, Profile, Settings, and Exit. If you have a dvd inserted it will also show up. 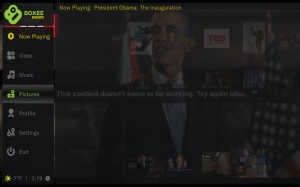 Here you can see your video menu. If you have video files on your computer, it will try to sort them into either movies or tv shows. I will talk mostly about the Internet because that is what I am most interested in. 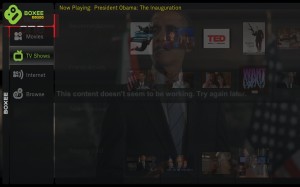 Here you can see the different Internet channels you can watch. BBC Iplayer doesnt work in the US, while other ones like HULU wont work outside the US, without some kind of proxy. 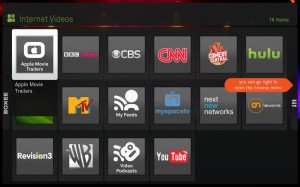 Below from the Apple Movies Trailer Section there is 4 different types of views you can have of when looking at movies and such on boxee. 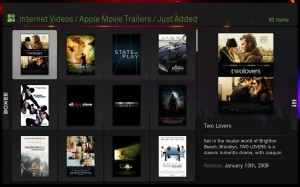 Below is Hulu, it even gives you an option to login to bring up your hulu queue. 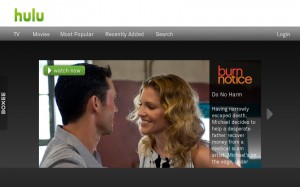 Here are the Hulu TV and Movie Viewing, almost identical, and very similar to the website. 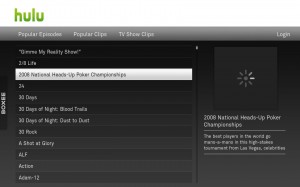 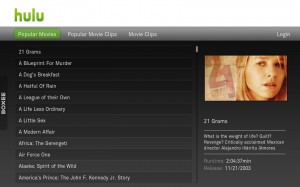 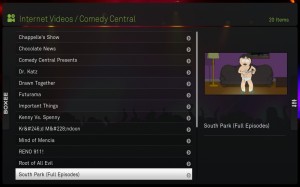 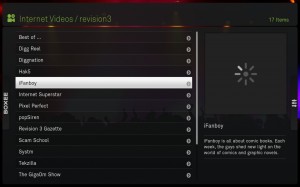 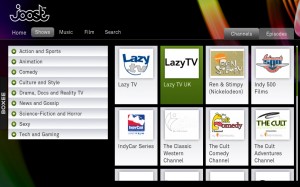 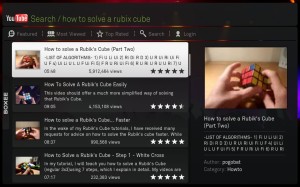 BBC -iPlayer ( doesn’t work in US as I stated above) 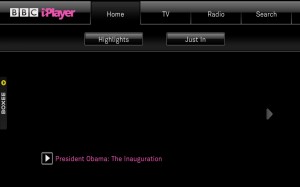 Again very similar to the Video Layout, on the left you got Artist, ALbums, Internet and Browse. It will look at your music folder and sort it for you, and get info and Lyrics. 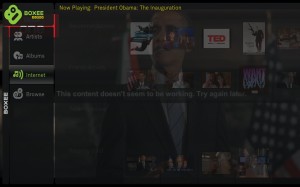 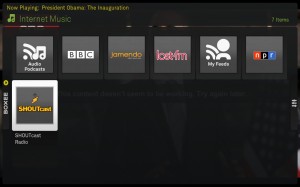 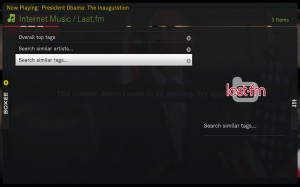 The picture tab, allows you to look at your local pictures, along with Internet ( flicker, picasa and The Big Picture) sites that host pictures. 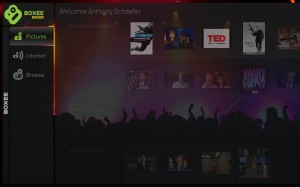 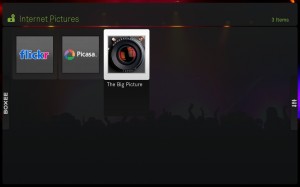 Here is the profile Tab, it brings up what I have previously viewed. But it also brings up your friends recent activity. You can also view their friends. 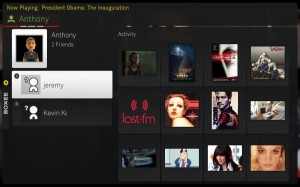 If you press “A” on your keyboard, it will bring up the Library Status, basicly boxee caching your media. 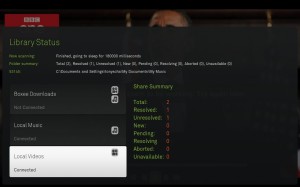 Here is the settings page, I wont go threw all, since there is alot of stuff here. 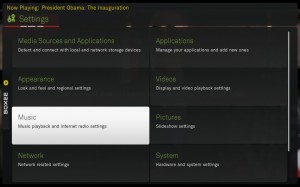 The Credits Page, which I should I would share of all the hard work these developers have done. 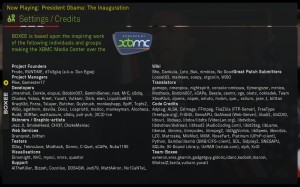 Finally The exiting of the program. If you go to suspend, it does a windows lock I noticed. 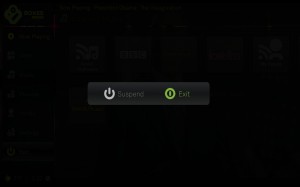 Whiles its virtually impossiable to cover everything, I hope this gives you a general idea of what boxee is captable of. So go on and give it a try.

OK.. let me explain this. Kayla and I seen on the news people taking hot water and throwing it in the freezing air, and watching the water turn to steam or freeze before it hits the ground.  So we had to try it!!!! 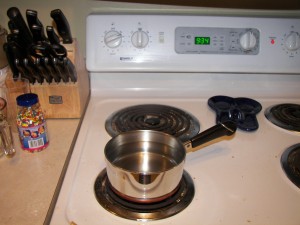 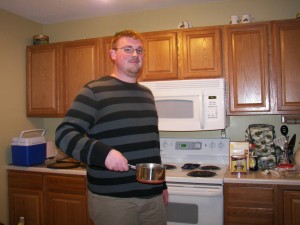 Me and the boiling water.

I accidentally threw water on myself, I know very smart…

You will have to ignore Kayla and the camera flipping.

Alright I would like to do a blackberry app of the week, but that means I would have to install and test alot more apps. So this will be updated as often as I find good apps. This time, my blackberry app is Google Mobile Apps. While most people have tried app I thought I would share what I like and what I don’t. I like the Google search, its saved history, and the launch for the other Google apps (gmail, news, reader, calendar, sync).

The Google search It works great, and is integrated nicely.

I wish the Google sync would sync the other way also, if I add a calendar entry on my blackberry, it doesn’t sync up with my Google calendar.

Google maps was nice, but it couldn’t find my exact location but the blackberry maps does ( my phone has gps).

The Google calendar and Google reader are hard to read, good thing Google sync adds my calendar events to my blackberry calendar.

That rounds up my short Google app review.

I am a person that never can be happy with themes and the looks of things. So I went ahead and changed this blogs theme to this new theme called pixeled. You can check it out here. Here is the original website.

So I posted a couple of days ago that Kayla and I got blackberry’s. Its a Blackberry curve 8310. So far I really enjoy it. It has internet and will do email, IM’s, and everything else you want a mobile phone to do.

My biggest problem is blackberry’s crappy integration with gmail.  I cant find a happy median. There seems to be serveral ways to do it.

I am not happy with any of them. I will have to update what I will do in the future… Come on gmail and blackberry work together!!!

I went back to solution 1, I was using 3, but then I couldn’t delete any of my mail, since I don’t send out that many emails, I figured getting a few extra on my blackberry.

Next time, I am going to post my favorite blackberry apps.

Hi from my blackberry. Kayla and I got blackberrys. I love it so far. Since I am typing from this little keyboard I am going to keep this short. BYE

Alright its officially 2009 now, and I would like to write a new post to roll in the new year with. Since Kayla and I have never went out for News Years, we got a babysitter and we went to the Cedar Rapids Piano Lounge. They had a piano duels which was pretty good. Since we didn’t get a seat right away, we stood toward the back, and at the table right in front of us was some Lesbians… Never seen so many girls kiss. Kayla would want me to make sure I mention how drunk she was… but she was just annoying, I only had to tell her to shut up once in the car. Other then that… it has been a pretty easy going day. So Hope you had a great New Year’s and a Happy 2009.